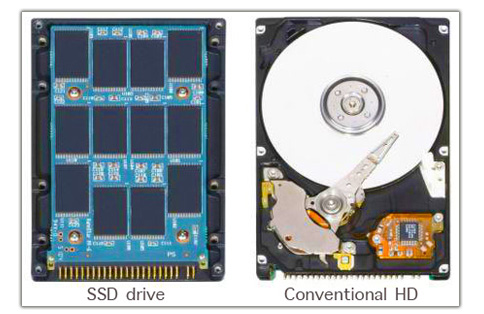 Solid State Drives have been around for a while! The fact that there are no moving parts (e.g. like a hard drive mechanics) makes them ideal for use in storing footage for cameras and audio files for recordings. Why not utilize them in your computer! Well, the price is still an issue!

There is definitely evidence that upgrading an old laptop hard drive to SSD can improve the speed. Also, I have found that if you run your programs on an SSD, it will give you a faster boot time since the read is much faster due to not having moving parts. This is also useful in the field where you are transporting computers and the risk of damaging your laptop’s HD becomes less.

See this link for a comparison test.

I was told by a colleague and a professional broadcast editor/tech person that having an SSD for your desktop and then assigning it for cache in editing and compositing programs (also color correction) can really give your system a boost. It doesn’t hurt to update the graphics card as well since most of the new programs utilize the GPU power more and more.