Posted on October 2, 2012 by Administrator 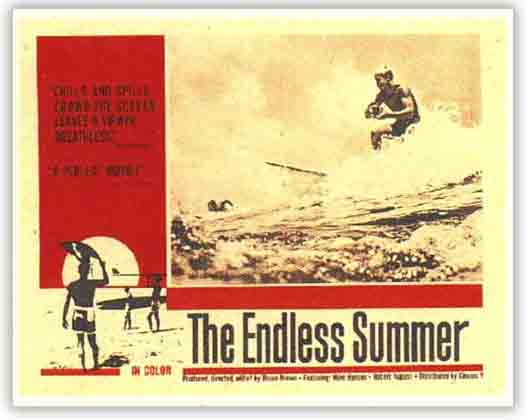 Surf movies have always been a very important medium for surfing. And their influence on the spread of surfing should not be underestimated. It was surf movies that first made the sport visible to people around the globe. Movies like Hawaiian Surfing Movie in 1953 followed by Hollywood’s fun filled surfer life style movies like Gidget (1959), Where the Boys Are (1960), Beach Party (1963), and even one with the King Elvis Presley: Blue Hawaii (1961)! I even made a feature film Sting of Chance (1997) with surfing sequences in it…I love surfing!
But, no full length surfing feature film got the just of it till Bruce Brown’s 1966 The Endless Summer! I revisited the movie on Blu-Ray and it is still brilliant. The cinematography, the humor, the low budget travel, having goofy fun with the actors, and a coherent story line makes it valid to this date.
The movie idea was born through the suggestion of a travel agent to Brown during the pre-production stages of the movie. The travel agent suggested that the flight from Los Angeles to Cape Town, South Africa and back would cost $50 more than a trip going around the world. After which, Bruce came up with the idea of following the summer season by traveling around the world thus the name The Endless Summer! Another important fact is that Brown was/is  a surfer and a filmmaker. He really got it!

One of the lessons to be learned is that he was turned down by Hollywood a few times regarding distribution of the film. He rented theaters in Wichita, Kansas and in New York city to a sold out crowd for weeks. After the success of the showing in New York, Don Rugoff of Cinema 5 distribution said he wanted to distribute the film and it’s poster as is, thus Brown selected him over other distributors who wished to alter the poster.